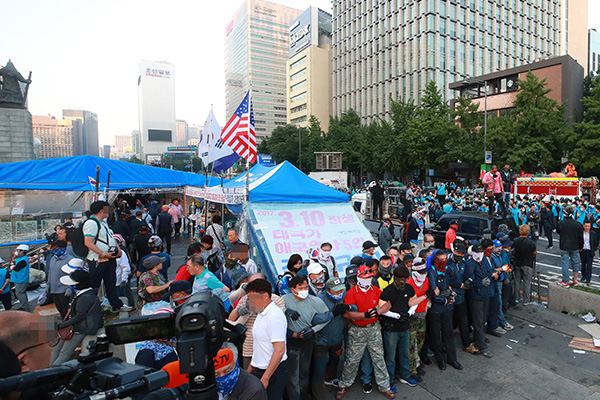 A far-right political party has re-erected large tents in central Seoul just hours after the city government tore them down.

According to the “Our Republican Party” and police on Tuesday, the party had restored three tents in Gwanghwamun Plaza just before 1 p.m. Tuesday.

This came after the Seoul Metropolitan Government had mobilized a team of about 900 people shortly after dawn and removed the illicit tents in the face of heavy resistance from demonstrators.

The tents were set up on May 10 to facilitate a sit-in demonstration calling for an investigation into the deaths of five "patriots" during pro-Park Geun-hye rallies in 2017 in protest of her removal from office earlier that year.

Some 400 party officials and supporters violently resisted the demolition, inciting physical altercations. Some 50 people were injured, though none of them seriously, according to police.

The pro-Park, far-right party was established as the Korean Patriots Party in 2017 and has engaged in numerous protests in support of the former president.
Share
Print
List