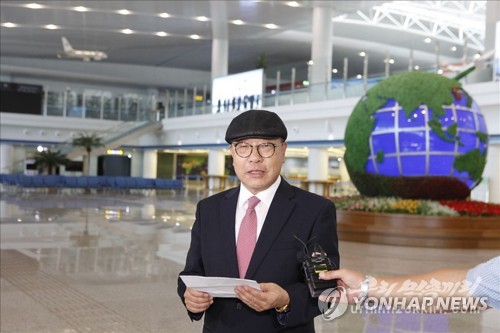 A South Korean son of a defector couple reportedly arrived in Pyongyang on Saturday to live in the communist country for good.

The North's propaganda Web site Uriminzokkiri said on Sunday that Choe In-guk, the second son of Ryu Mi-yong, the late chairwoman of the central committee of the Chondoist Chongu Party, arrived in Pyongyang for "permanent residence."

Ryu and her husband, Choe Tok-sin, who served as foreign minister in South Korea during the 1960s, immigrated to the United States in 1976 and defected to the North in 1986, leaving behind two sons and three daughters.

Upon arriving at a Pyongyang airport, Choe reportedly said he will devote his life to realizing unification of the two Koreas in accordance with the desire of his late parents.

The 73-year-old Choe reportedly did not seek government approval for his trip to North Korea.
Share
Print
List