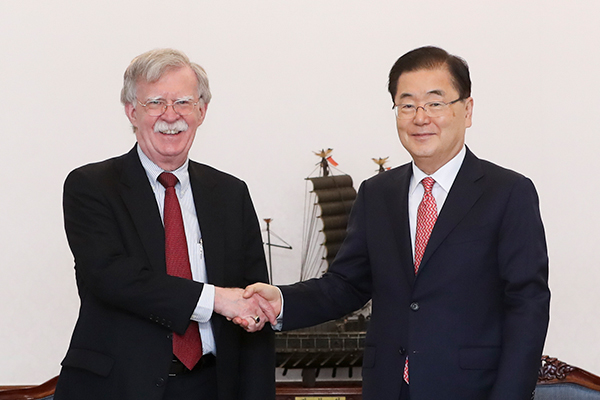 Presidential Spokesperson Ko Min-jung said Bolton made the remarks when he met with his South Korean counterpart Chung Eui-yong in Seoul on Wednesday.

According to Ko, Chung explained to Bolton how South Korea sternly responded after Chinese and Russian military aircraft entered the KADIZ on Tuesday without prior notice.

The two officials also agreed on the need for international efforts to ensure safe navigation for commercial ships. In particular, they said they would continue cooperation to guarantee the safety and freedom of navigation for ships in the Strait of Hormuz.

Chung and Bolton also vowed to hold consultations on their countries' defense cost-sharing arrangement after 2020 in the most reasonable and fair manner, based on the spirit of the South Korea-U.S. alliance.

In regards to the North Korea issue, the officials shared the view that real progress must be made in denuclearization negotiations through the swift resumption of working-level talks between Washington and Pyongyang, as agreed on by U.S. President Donald Trump and North Korean leader Kim Jong-un at Panmunjeom last month.
Share
Print
List