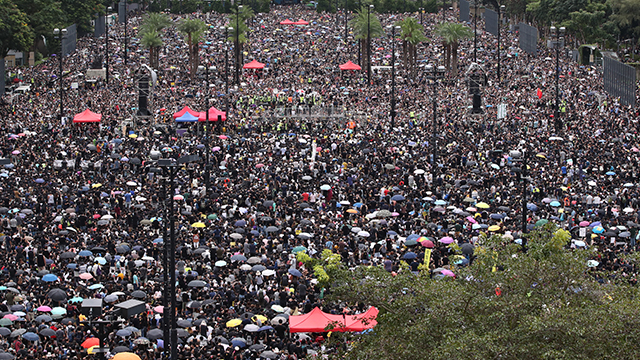 A sea of pro-democracy protesters flooded the streets of Hong Kong for the eleventh consecutive weekend amid concerns of a military intervention by the Chinese government.

The Sunday rally ended peacefully with no reports of violence.

An organizing group called the Civil Human Rights Front said on Sunday that at least one-point-seven million people participated in the rally, although police estimate the turnout was far lower.

Organizers said they hoped to stage a peaceful event after past weekend protests were marred by violent clashes between police and some demonstrators.

The protests started in June against proposed changes to Hong Kong's extradition law that would allow a person arrested in Hong Kong to be tried in mainland China or elsewhere. The proposal has been shelved, but not withdrawn.

The protesters' demands have since expanded to include the resignation of Hong Kong leader Carrie Lam, democratic elections and an independent investigation into police use of force.
Share
Print
List