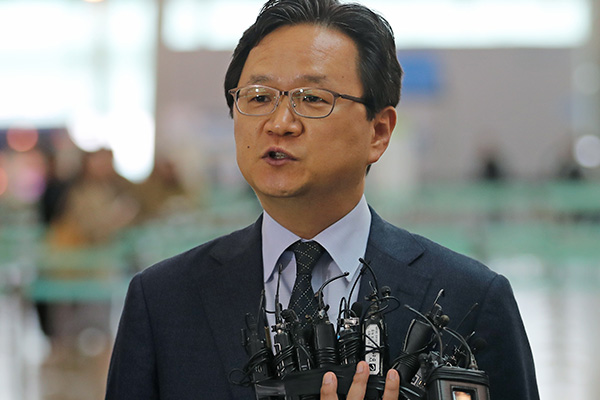 South Korea and Japan are set to hold bilateral consultations in Geneva on Friday to resolve a trade dispute triggered by Japanese export restrictions.

Chung Hae-kwan, the director general in charge of legal affairs for the Trade Ministry, told Seoul-based Yonhap News on Thursday that he will seek an early resolution of the dispute.

Arriving at Geneva Airport ahead of the consultations, Chung said that he will clearly explain how Japan's export controls run against World Trade Organization(WTO) rules and discuss possible ways to produce a mutual agreement on the matter.

Seoul's chief delegate said it's uncertain whether the two sides will hold bilateral talks more than once, but South Korea will focus on the imminent consultation at the moment.

He added that if the two sides fail to reach an agreement in the bilateral consultations, Seoul will move on to the next step: panel hearings.

Under WTO rules, South Korea may request an expert panel to deliberate the case if bilateral talks with Japan fail to reach a solution within a 60-day consultation period.
Share
Print
List