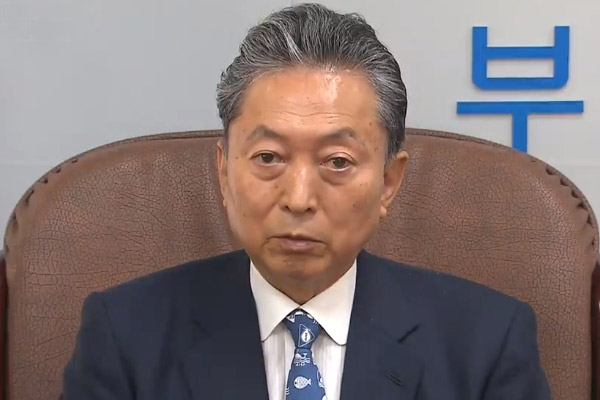 The former PM visited the National Memorial Museum of Forced Mobilization under Japanese Occupation in the southern city of Busan on Saturday morning in the last official schedule of his Korea visit that started Friday.

It marked the first time a senior Japanese politician made a visit to the museum since it opened in 2015.

Hatoyama looked around exhibition rooms and was at times seen holding his hands together in prayer and having a moment of silence to express sympathy.

He laid flowers at a rooftop memorial park and again bowed his head.

He said that around eight million out of 20 million Koreans of the then Joseon kingdom were forced by the Japanese to serve in the military or as laborers where some even lost their lives.

He said his visit to Korea is to promote the message of accurately viewing history and what was perpetrated in the past.

Hatoyama served as Japan's 93rd prime minister from September 2009 to the following June and is a leading progressive politician in the country.

He also visited the Seodaemun Prison History Museum in Seoul in 2015 and apologized for Japan's colonial occupation while kneeling before a memorial monument.
Share
Print
List