Moon Says No Authority 'Reigns Over' the People 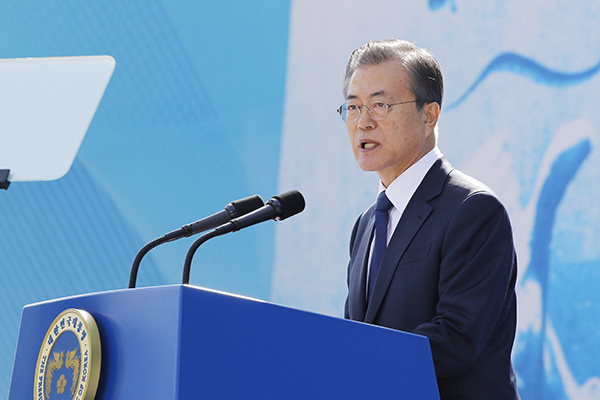 Anchor: President Moon Jae-in said Wednesday that no authority will reign over the people. The remarks, made at a national ceremony commemorating the 40th anniversary of the Busan-Masan Democratic Protests, come as the government pursues prosecutorial reform.
Park Jong-hong has the details.

Report: No government agency will be able to "reign over” the people so long as South Korea sustains a great track record of upholding democracy.

This was the key message delivered by President Moon Jae-in in a ceremony at Kyungnam University marking the 40th anniversary of the Busan-Masan Democratic Protests against military dictator Park Chung-hee in 1979.

[Sound bite: President Moon Jae-in (Korean)]
"The people are now demanding more democracy as well as better democracy. All agencies of power must keep in mind the common knowledge of democracy that they exist not for themselves, but for the people."

​Moon’s remarks come amid efforts by his administration to reform the prosecution, which many regard as having too much power and authority.

The president also apologized to those whose human rights were violated during the nearly two-decade-long Park Chung-hee regime.

When democracy was in crisis, Moon said the people saved democracy with action.

[Sound bite: President Moon Jae-in (Korean)]
"We commemorate the Busan-Masan Democratic Protests today because we hope that yesterday's endeavor for democracy will [lead] to an expansion into a more developed democracy. I sincerely thank the people who have vitalized democracy through action and hope that our democracy will develop into a more mature democracy of yielding, sharing, co-prosperity and unity."