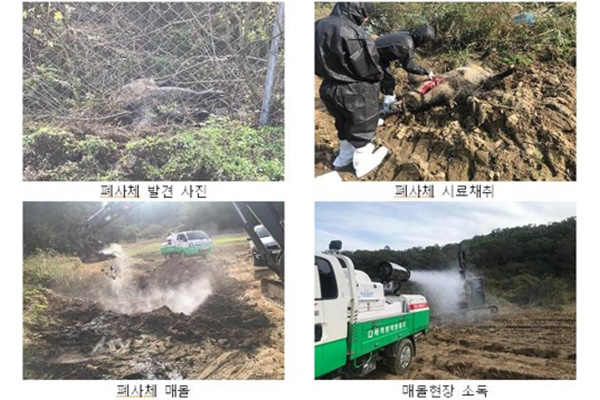 South Korea has confirmed the discovery of an eleventh wild boar infected with African swine fever(ASF) near the inter-Korean border in Yeoncheon, Gyeonggi Province.

The National Institute of Environmental Research(NIER) under the Environment Ministry said on Monday that a wild boar found dead in an area between the Demilitarized Zone and the Civilian Control Line on Sunday tested positive for the virus.

The dead animal was found by a soldier at 11:20 a.m. Sunday, who reported the case to Yeoncheon County officials. NIER confirmed the presence of ASF in the carcass at 3 a.m. Monday.

The municipal government buried the dead animal in accordance with standard operating procedures.

The confirmation is adding to concerns about a possible spread of the deadly animal disease, as the carcass was found just under five kilometers away from where another infected wild boar was found dead on Oct. 15.

The institute said it would install additional barbed wire and strengthen inspections around the area.
Share
Print
List