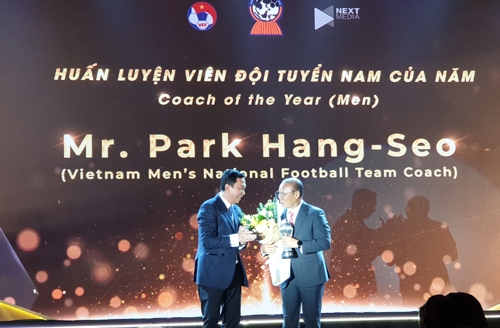 South Korean coach Park Hang-seo of the Vietnamese men's national football team has won the coach of the year award from the ASEAN Football Federation (AFF).

Dubbed a national hero in Vietnam, Park received the award in a ceremony held in Hanoi on Friday.

The prize honors Park as the best coach among the teams in the ten-member Association of Southeast Asian Nations.

In recent preliminaries for the 2022 Qatar World Cup, Vietnam also tied with Thailand and went on to beat Malaysia and Indonesia.

Park signed a lucrative extension on Thursday as coach of both the senior and Olympic teams. The new contract guarantees two years with an option for a third year.
Share
Print
List