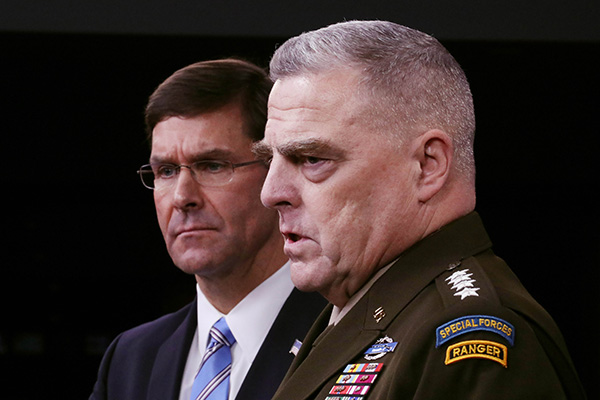 U.S. Joint Chiefs of Staff(JCS) Chair Mark Milley said the American public asks questions about why the United States should station troops in South Korea and Japan and why the allies can't pay for their own defense.

The Pentagon on Monday posted on its website Milley's remarks made on Sunday aboard a military aircraft en route to the Indo-Pacific region for his first overseas trip since taking office in September.

The Pentagon said Milley was emphasizing the importance of the U.S. alliances with South Korea and Japan, countries he will visit this week.

The U.S. JCS chief told reporters traveling with him that "the average American looking at the forward deployed U.S. troops in South Korea and Japan ask some fundamental questions: Why are they needed there? How much does it cost? These are very rich and wealthy countries, why can't they defend themselves?"

Milley added that it is incumbent on the U.S. to make sure it adequately explains how the U.S. military is a stabilizing force in Northeast Asia in preventing and deterring the outbreak of armed conflict.

He also made clear that the U.S. hopes South Korea will renew its military intelligence sharing agreement with Japan, describing the pact as "key for security and stability" in the region. He said South Korea, the U.S. and Japan are stronger when they are together.

Following a two-day stay in Japan, Milley is set to meet with his South Korean counterpart Park Han-ki at the annual Security Consultative Meeting in Seoul on Friday, along with U.S. Defense Secretary Mark Esper.
Share
Print
List