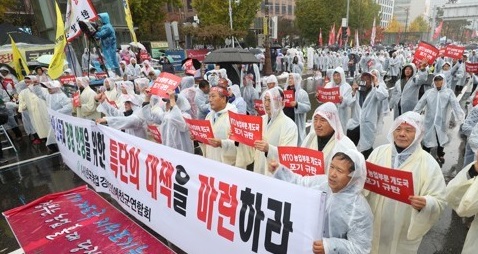 Anchor: South Korea's farming community took to the streets of Seoul on Wednesday, protesting the government's recent decision not to exercise benefits related to its developing nation status at the World Trade Organization in future trade negotiations. The protesters are worried the decision will eventually lead to a drastic cut in state agriculture subsidies and tariffs.
Choi You Sun has the details.

Report: Farmers gathered in front of South Korea's National Assembly in Yeouido on Wednesday, denouncing the government's decision last month not to seek privileges associated with its developing country status at the World Trade Organization(WTO).

Among their chief complaints are that the withdrawal will force the country to scrap subsidies and tariffs, including a 513-percent tariff on rice imports, in future trade talks.

Though authorities said the decision will have no immediate impact on agricultural tariffs and subsidies since it affects future multilateral negotiations, farmers are still deeply concerned.

Those who took part in Wednesday's demonstration, however, claimed the government is only referring to expanding or revising already-existing projects, rather than responding to new demands from the industry.

The farmers' groups want state support for innovating and developing the agriculture industry, enforcement of a public direct payment program for the farmers, and measures to expand domestic demand for local produce.

Most organizers estimated that some ten thousand farmers gathered for the protest.

South Korea is the 12th-largest economy in the world in terms of gross domestic product, but has been categorized as a developing country at the WTO with regard to agriculture-related policies.

U.S. President Donald Trump has been pushing to ensure self-declared developing countries do not take advantage of special and differential treatment that come with the status.
Choi You Sun, KBS World Radio News.
Share
Print
List