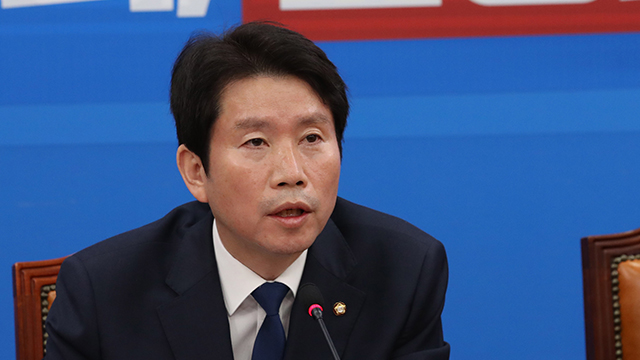 Tensions are rising at the National Assembly after the main opposition Liberty Korea Party filed for a filibuster on 199 bills on Friday to prevent a parliamentary vote on contentious reform bills.

Ruling Democratic Party Floor Leader Lee In-young strongly criticized the LKP move on Sunday during a news conference at the Assembly, condemning it as a "political violence aimed at paralyzing parliament."

Declaring that the politics of negotiations has ended, the floor leader said that the LKP did not not care about the people at all and closed the door for dialogue by filing for the filibuster.

Lee then said that efforts to seek dialogue and negotiations with the LKP appear to be meaningless, vowing to pursue the swift passage of key reform bills in cooperation with other parties and political forces seeking reforms.

Meanwhile, Floor Leader Oh Shin-hwan of the minor opposition Bareunmirae Party proposed on Sunday to the DP and LKP that they hold a plenary parliamentary session on Monday to pass key bills linked to people's lives first, including a revision to the road traffic act that focuses on strengthening children's safety in school zones.

Oh proposed that the rival parties hold negotiations for a week in order to narrow differences on fast-tracked bills on election and judicial reforms.
Share
Print
List