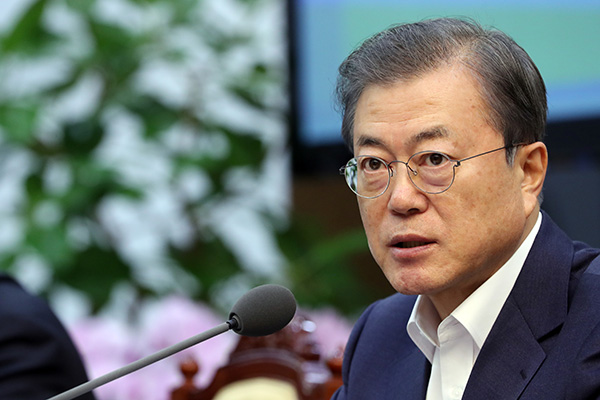 Chairing a meeting of his top aides on Monday, Moon said it's unacceptable to link bills that are critical for people's lives with other political issues as a bargaining chip.

[Sound bite: President Moon Jae-in (Korean)]
"The 20th National Assembly has been paralyzed. It is very unfortunate to see the situation taking place when the fruits of legislation and budgets must be reaped. The 20th Assembly has continued to be disrupted. Our politics have regressed as political wrangling has taken priority over public livelihood and political interests are placed ahead of the people... Laws needed by citizens must not become a negotiation item linked to political circumstances."

The National Assembly is failing Monday's deadline to pass next year's budget as rival parties remain at odds over controversial fast-tracked bills on election and judicial reforms. A parliamentary plenary session still could not be convened as the ruling party kept it closed to prevent the main opposition from launching a filibuster.
Share
Print
List