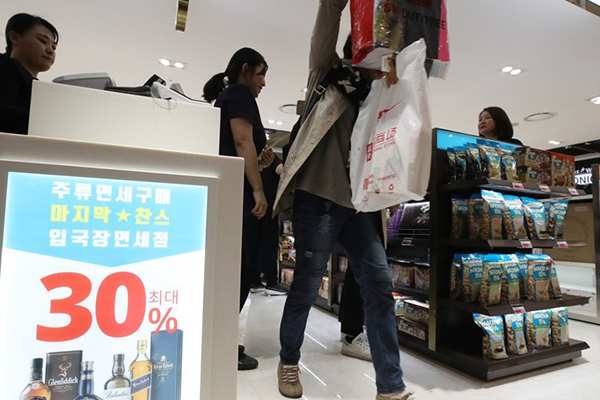 The South Korean government will establish on-arrival duty free shops at all major airports in the country and include domestic lodging expenses in income tax deductions as part of efforts to revitalize domestic demand.

At an economy-related ministers' meeting led by President Moon Jae-in on Thursday, the government set its 2020 growth outlook at two-point-four percent, citing recoveries in the global economy, the semiconductor industry and domestic demand.

To achieve the growth, all major airports, including Gimpo International Airport, will house duty free shops at arrival terminals and passengers will be allowed to purchase up to ten packs of cigarettes.

In a bid to encourage domestic travel, 30 percent of lodging expenses will be included in income tax deductions so long as that amount is less than one million won.

Value-added taxes for certain products sold during the government-led Korea Sale Festa period will be exempt and part of taxes imposed on energy-efficient electronics will be returned to consumers.
Share
Print
List