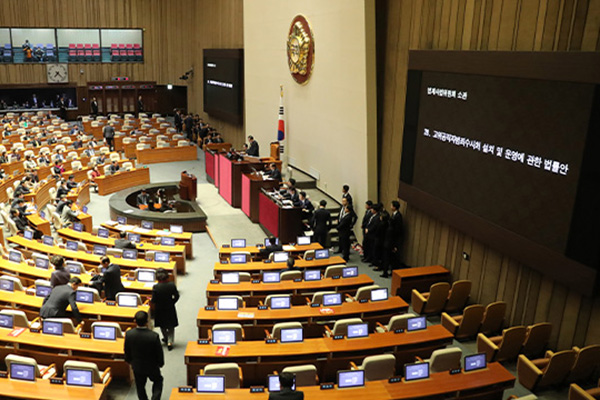 A controversial bill that would create an independent anti-corruption investigative body has been passed.

During a plenary parliamentary session that was declared open over 30 minutes past the initially planned time on Monday evening, a coalition of the ruling Democratic Party(DP) and minor parties passed the contentious bill 159-14 with three abstentions.

The vote on the fast-tracked bill was made after Assembly Speaker Moon Hee-sang exercised his power to restore order following protests from the main opposition Liberty Korea Party(LKP).

Dozens of LKP lawmakers gathered around the speaker’s podium for over a half-hour since before 6 p.m. to block the planned vote, but they were dispersed by security guards mobilized by the speaker.

The opposition party lawmakers stormed out of the parliament once the ballot began to be cast via an electronic voting system.

Earlier in the day, the DP announced that it would convene a plenary session at 6 p.m. to put the controversial bill to vote.

The LKP blocked the previous attempt to pass the bill with a 27-hour filibuster through late Friday night in the previous extraordinary parliamentary session last week.

Under parliamentary law, however, the same type of action on the same bill is not permitted.

Earlier last week, the parties within the so-called "four-plus-one" framework -- the DP, three minor opposition parties and a splinter group -- finalized the bill.

Under the bill, an agency will be created and tasked with investigating corruption allegations surrounding the president, lawmakers, the Supreme Court chief, the Constitutional Court chief, the prime minister, judges, prosecutors and other high-level officials.

Police officials, prosecutors and judges will also be under the body's purview.

Ahead of the vote on the contentious bill, minor opposition Bareunmirae Party Rep. Kwon Eun-hee proposed revising it to grant the proposed body the power to indict but would mandate the body investigate only bribery and corruption allegations. The revision was voted down right before the vote on the original bill was made.

The main opposition argues that the envisioned investigative authority will be full of progressive lawyers working at the behest of the president and will wield absolute power to pick and choose what to investigate while uncovering irregularities committed by political rivals.

The ruling and minor opposition parties refute these claims and say the new agency will keep the nation's powerful prosecution in check.
Share
Print
List