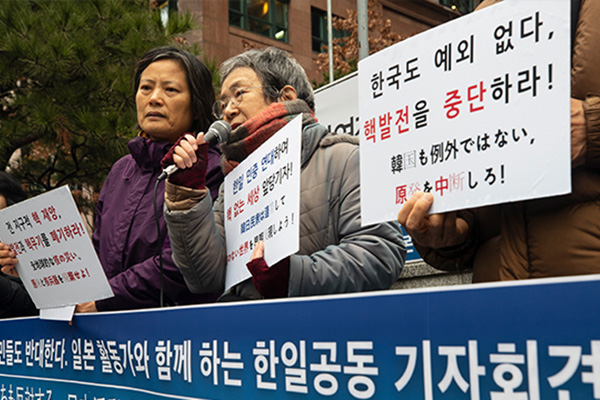 South Korean and Japanese civic activists have condemned the Japanese government for mulling ways to release contaminated water from the Fukushima Daiichi nuclear power plant into the ocean.

Members of the Asia-Wide Campaign against the U.S.-Japanese Domination and Aggression of Asia, which is based in South Korea, and the Women from Fukushima Against Nukes, held a news conference in front of the Japanese embassy in Seoul on Wednesday.

The groups said releasing the contaminated water from the tsunami-wrecked nuclear plant constitutes a serious crime.

They also cited the Tokyo Electric Power Company's estimate that some 170 tons of radioactive water builds up every day at the Fukushima nuclear plant, and that by the summer of 2022 storage space will run out.

In light of the Japanese government’s latest statements and actions, the activists said Tokyo is likely to release the contaminated water within two to three years.

The groups stressed that any release of the water will deal a serious blow to the ocean’s ecosystems and human beings.
Share
Print
List