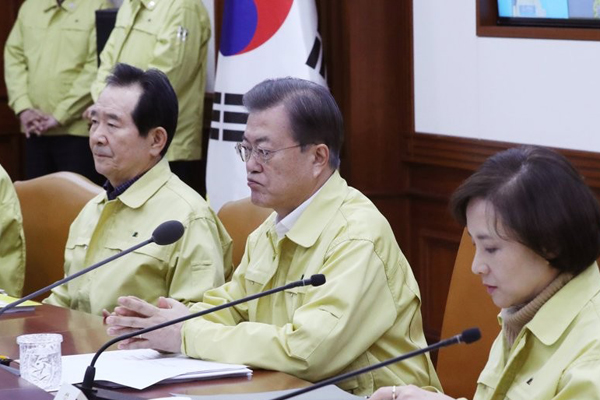 President Moon Jae-in said on Sunday that the government has decided to raise its alert status on the novel coronavirus to the highest "serious" level in response to a surge in new infections in the country.

The president announced the decision in his opening remarks at a pan-government meeting on the COVID-19 outbreak.

It's the first time that the country has raised the virus alert level to "serious," the highest in the four-tier system, in eleven years since Influenza A (H1N1) in 2009.

President Moon said that the nation is facing a grave watershed in the COVID-19 situation and that a few days from now is a very critical moment.

The president stressed that it is a crucial time for the whole nation, including the central and local governments and citizens, to make unified and all-out efforts to ride out the outbreak.

He ordered the government and local municipalities not to hesitate to take "unprecedented powerful" measures to contain the deadly virus without being restricted by "regulations."

Moon said that health authorities are taking "special" steps in connection with the followers of the Shincheonji Church in the southeastern city of Daegu, which has been an epicenter of many infections reported over the past few days.

While calling for active public cooperation in the fight against the virus, the president reassured that the nation can overcome the outbreak although the situation is grave.
Share
Print
List