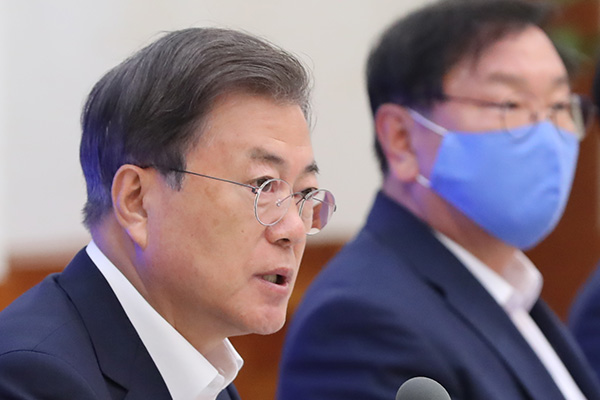 President Moon Jae-in has expressed concerns about rising tensions between the United States and China.

Presiding over a meeting of the emergency economic council on Monday, Moon said deepening nationalism across the world and conflicts between powerful nations are putting considerable strain on the South Korean economy.

His remarks came as Seoul’s two largest trading partners are locking horns over China’s proposed security law for Hong Kong in addition to their blame game over the COVID-19 pandemic.

U.S. President Donald Trump also reportedly intends to invite South Korea to the G7 summit in September along with Russia, Australia and India, in a move that apparently aims to get those countries to side with Washington and go against Beijing.

Noting that the coronavirus-triggered economic crisis is worsening, Moon said it's not easy even to predict when the economy will hit its bottom and rebound.
Share
Print
List