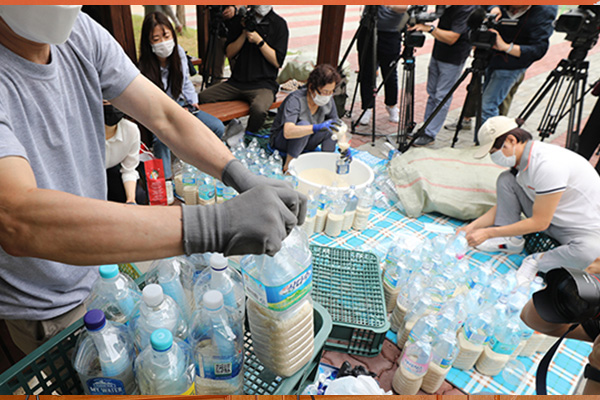 Park Jung-oh, the head of defector group Kuensaem, whose operation permit is expected to be revoked by the government for its anti-Pyongyang propaganda campaigns, attended a hearing to explain the group's position for the final time.

The hearing came weeks after the Unification Ministry decided to file a complaint with police against Fighters for a Free North Korea and Kuensaem and to revoke their permits.

Park's lawyer said seeking criminal punishment against the heads of groups that send anti-Pyongyang leaflets and rice to North Korea and revoking permits are an "infringement on the freedoms of expressions and assembly guaranteed by the Constitution."

The ministry is accusing Kuensaem of attempting to send rice, USBs and Bibles in plastic bottles to North Korea eight times this year, which is not part of its aim of peaceful unification through the education of young North Korean defectors.

It adds that such propaganda campaigns are activities that could threaten the lives and safety of border area residents, and are sufficient reason to revoke the operation permit under the law.

Park Sang-hak, the head of another group Fighters for a Free North Korea, whose properties were seized by the police on Friday as part of the related probe, didn't attend the hearing.
Share
Print
List