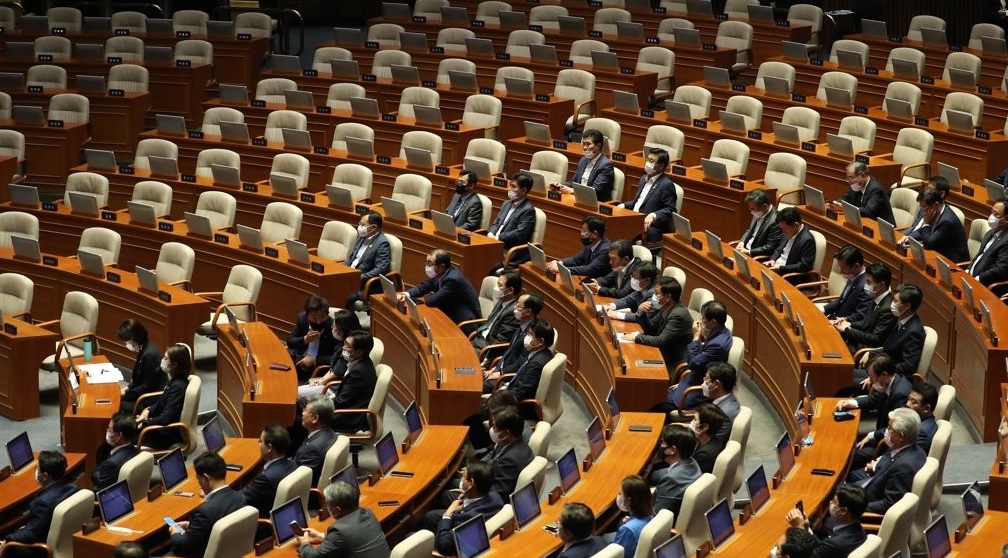 Anchor: The National Assembly held a plenary session Monday afternoon to appoint the heads of key parliamentary committees. But the appointments were made without the participation of the main opposition United Future Party(UFP), which insisted that it should produce the chair for the Legislation and Judiciary Committee under a long-standing parliamentary tradition.
Sam Im has this report.

Report: The ruling Democratic Party(DP) has produced chairpersons for 17 of 18 parliamentary standing committees, breaking a 35-year old convention of assigning the posts according to the seat distribution by parties.

DP lawmakers convened the plenary session on Monday and voted for its nominees for eleven committees, except for the chief of the intelligence committee, the appointment of which requires an approval by the vice speakers of the National Assembly.

The floor leaders of the ruling DP and main opposition United Future Part(UFP) made last-ditch efforts Monday morning to strike a deal on the chair seats, but came short of a compromise, disagreeing on who will lead the powerful Legislation and Judiciary Committee.

The main opposition UFP did not take part in the vote in protest, leaving the leadership of the committees to the DP.

As the ruling party pushed ahead to form parliamentary standing committees with chairpersons of its choice, UFP lawmaker Chung Jin-suk said he will also give up one of the two vice speaker positions, which he is entitled to under the parliamentary convention.

In the April general elections, the ruling party secured a supermajority, winning a total of 176 out 300 National Assembly seats. And now, for the first time since the 12th Assembly formed in 1985, the ruling party is expected to take all of the standing committee chair posts under the current 21st Assembly.

As the National Assembly nearly completed the formation of standing committees, Prime Minister Chung Sye-kyun delivered his speech in front of ruling party lawmakers, calling for the swift passage of the government's third extra budget, aimed at riding out what is deemed to be the worst recession since the Great Depression.
Sam Im, KBS World Radio News.
Share
Print
List