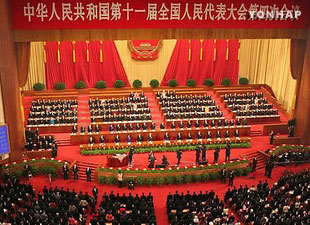 According to South China Morning Post(SCMP) on Tuesday, 162 members of the standing committee of the National People's Congress(NPC) approved the law within the first 15 minutes on the last day of a three-day session.

The bill reportedly states that an agency should be established in Hong Kong to prohibit acts of secession, subversion, terrorism and collusion with foreign forces that endanger national security and to punish such acts.

Anyone violating the law is expected to face a maximum penalty of life imprisonment, not a ten-year jail term as previously reported by media outlets.

Earlier, Washington vowed to strip Hong Kong of its preferential trade status, and enacted visa restrictions on Chinese officials believed to be responsible for undermining local autonomy and freedom.

The law is expected to take effect on Wednesday, the 23rd anniversary of the British handover of Hong Kong to China.
Share
Print
List