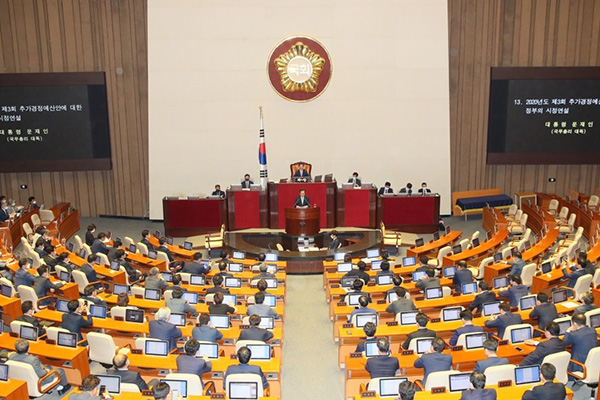 The National Assembly will convene a plenary session on Friday to vote on the government's third extra budget bill aimed at helping the nation better cope with the impact of the COVID-19 pandemic.

Ruling Democratic Party(DP) Rep. Park Hong-keun, a ranking member of the party's budget committee, said Friday that the plenary session is scheduled to begin at 7:00 p.m.

Park emphasized that a review of the latest budget was done openly for the first time in parliamentary history and that the amount that was reduced is believed to be the largest-ever.

The main opposition United Future Party(UFP) and the minor opposition People's Party, meanwhile, plan to boycott Friday's session in protest of the DP-led budget review, which they claim was rushed.

On Thursday, UFP interim leader Kim Chong-in accused the ruling party of hastily proceeding with the review of the record-high budget of over 35 trillion won, after President Moon Jae-in called for its passage by Friday.
Share
Print
List