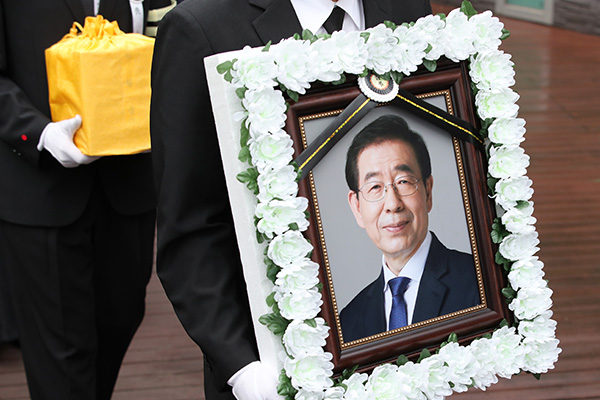 Police are now searching the mobile phone of late Seoul Mayor Park Won-soon, who was accused of sexual harassment before his death.

According to the Seoul Metropolitan Police Agency on Wednesday, in addition to the data recovery, efforts are also underway to seek a court warrant to secure his conversations made via the phone.

A mobile phone believed to be the mayor’s was collected from where he was found early Friday. The expectation is that digital forensics may uncover crucial information regarding the accusations and whether the mayor knew of the criminal complaint.

Controversy is swirling over whether Park was notified immediately after his former secretary filed the police complaint over the alleged sexual misconduct, and if so by whom.

The 64-year-old civic activist-turned-mayor, who had not been implicated in any other known scandal in recent months, abruptly canceled all his appointments last Thursday, the day after the complaint was filed. He was found dead on a Seoul mountain hours later in an apparent suicide.

Police said they notified the presidential office of the complaint last Wednesday as they customarily do regarding important matters but denied speculations that they informed Seoul City or the mayor. The top office also rejected media reports that it notified the mayor of the complaint.
Share
Print
List