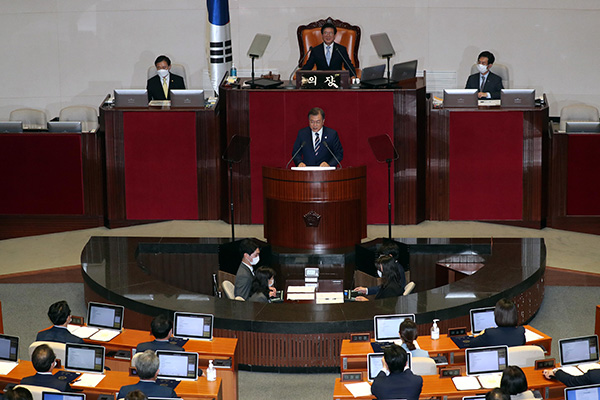 In a speech during the opening ceremony of the new Assembly held Thursday, Moon said politics of cooperation are even more necessary during times of change and global crisis such as today.

He said that despite the achievements and efforts made by the 20th Assembly, the public held the body in low regard. Moon said real life politics have failed to catch up with the rising political awareness of the Korean people.

He said the biggest failure was the failure to cooperate, a failure for which everyone was to blame, including himself.

President Moon asked political parties to live up to the public's call for bipartisan cooperation to overcome national challenges while also competing through policy measures and better politics.

He asked the Assembly to lead efforts in national unity.

Moon said that failure to proactively respond in the post-coronavirus era will leave Korea a second-rate country for good, and stressed that the Korean New Deal is the key to the future.

But he underlined that real estate is the top legislative concern and vowed to pursue all available means to stabilize housing prices and suppress speculative investment.
Share
Print
List