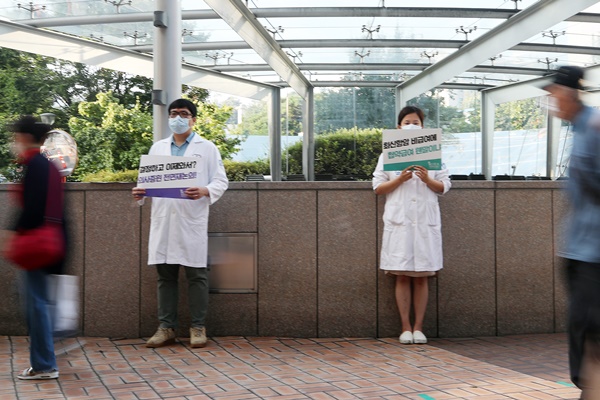 Anchor: Health and Welfare Minister Park Neung-hoo issued a return-to-work order to interns, residents and doctors on strike in Seoul, Gyeonggi and Incheon. The government plans to conduct an on-site investigation to check if the affected doctors returned to work, beginning with emergency rooms and intensive care units in the capital region. However, resident doctors remain adamant.
Kim Bum-soo has more.

[Sound bite: Health and Welfare Minister Park Neung-hoo (Korean/English translation)]
"As of 8:00 am on August 26, the government is activating a return-to-work order to residents and fellows of medical institutions in the Seoul-metro region."

Interns and residents at South Korean hospitals are on a walkout in protest of the government's plan to increase the number of doctors in the country.

Amid the recent surge of coronavirus infections, the government has sent an ultimatum to the trainee doctors to return to work.

[Sound bite: Health and Welfare Minister Park Neung-hoo (Korean/English translation)]
"We urge residents and fellows to immediately return and attend to patients. We will deal sternly with law and principle if the failure to return to work creates a vacuum in medical service and hurts patients."

Delivering the statement in a news conference on Wednesday, Health and Welfare Minister Park Neung-hoo said the government could revoke the medical licenses of those who do not cooperate.

[Sound bite: Health and Welfare Minister Park Neung-hoo (Korean/English translation)]
"In the grave COVID-19 situation, we do not have the time nor strength to deal with unnecessary conflict. I would like to urge medical workers to cooperate to stabilize the coronavirus situation. It will not be too late to discuss ways to improve medical policies after that."

Doctors are adamant that the return-to-work order is in violation of their right to collective action.

The Korea Medical Association(KMA), a group of some 130-thousand doctors, also began a three-day strike on Wednesday in protest of the government's medical reform plans.

During online events held in lieu of protest rallies, Kim Dong-seok, president of the Korean Medical Practitioners Association, argued that increasing the supply of doctors will only lower the quality of medical service.

[Sound bite: Kim Dong-seok - president, Korean Medical Practitioners Association (YouTube KMA-TV / Korean/English translation)]
"I am an obstetrician. The lack of obstetrics and gynecology clinics in rural areas does not mean that there are not enough doctors but that there are no women delivering babies. If you increase the number of doctors when there are no patients, where would all those doctors go in ten years?"

Among other contentious issues, the government's medical reform plan calls for producing four-thousand more doctors by 2031.

The government says the measure is necessary to deal with insufficient medical services in regional areas as well as the expected surge of patients in the nation, soon to become a super-aged society.
Kim Bum-soo, KBS World Radio News.
Share
Print
List