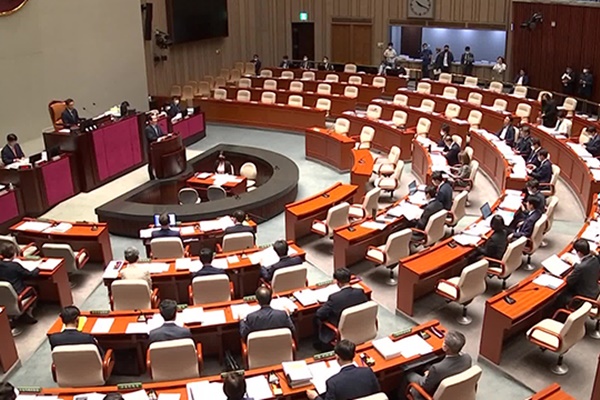 Anchor: South Korea's rival political parties remain at odds over the government's fourth extra budget to finance COVID-19 relief, as the National Assembly began a review. The ruling party is pushing to approve it before the upcoming Chuseok holiday, while the main opposition is demanding that the government offer free influenza vaccinations for everyone.
Choi You Sun reports.

The seven-point-eight-trillion-won budget will be used to support small and medium-sized enterprises(SMEs) and small business owners that were hardest hit by the pandemic, as well as to secure employment stability.

Under the plan, families with children attending elementary school or younger will receive 200-thousand won for each child in child rearing support, while everyone aged 13 and older will receive a one-time, 20-thousand-won deduction in their mobile service fee.

While the rival political parties agree on the urgent need for the relief, the main opposition People Power Party(PPP) is suggesting that the government offer free influenza vaccinations for everyone, instead of a one-off mobile fee deduction.

The PPP has also proposed expanding the child support to include students attending middle and high schools.

Stressing that the 20-thousand-won deduction wouldn't serve to assist those in need, PPP floor leader Joo Ho-young has said that he will not rush to approve the budget for it to be enforced before the Chuseok holiday, unless there's assurance that it will help the nation.

The ruling Democratic Party(DP) is open to other suggestions, but is against free vaccinations for all, citing a lack of supply.

The ruling and opposition parties have agreed to vote on the budget next Tuesday.
Choi You Sun, KBS World Radio News.
Share
Print
List