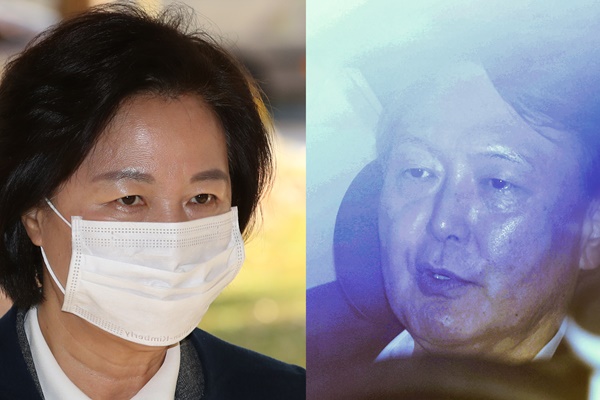 Choo announced the unprecedented move in a media briefing on Tuesday, saying that as the top supervisor of the prosecution, she could no longer tolerate Yoon continuing in his duties as prosecutor general. She also requested disciplinary measures against him.

[Sound bite: Justice Minister Choo Mi-ae]
"Today, I report to the Korean people with a grave heart that the Prosecutor General is reprimanded and his duties have been suspended. The Justice Ministry has been probing suspicions related to the Prosecutor general and confirmed significant wrongdoings in multiple occasions."
"As the justice minister, which is the highest supervisor of prosecutorial affairs,  I concluded that the prosecutor general can no longer carry out his duties, and order the suspension of his duties and disciplinary action against him."

It marks the first time in the history of the South Korean Constitution that the justice minister has decided to suspend the top prosecutor.

Choo said the ministry has probed several allegations of corruption against Yoon and verified “serious and grave” corruption charges, including an inappropriate meeting with the owner of a major media company.

The minister argued that Yoon also obstructed an investigation into himself by refusing face-to-face questioning by inspectors from the ministry, and failed to live up to the political neutrality required of the prosecution.

The minister’s decision followed longstanding conflicts between the two over prosecution reform.

Choo, who is seeking to complete reform measures left unfinished by her predecessor Cho, has long criticized Yoon for refusing to cooperate with her mandate, painting him as loyalist to his fellow prosecutors and an ally of the opposition bloc despite being a presidential appointee.

In the process, Yoon has emerged as a possible presidential candidate, at times outpacing leading presidential hopefuls from the ruling Democratic Party in public polls.

During a parliamentary audit last month, he said he will consider ways to further serve society and the public when his two-year term in office ends next year, a remark that many considered as suggesting political ambition.

In response to the minister's decision, Yoon said he has done his best to defend the political neutrality of the prosecution, adding he has done nothing shameful as prosecution general.

The top prosecutor also said he will take legal measures in response to what he called "illegal and unfair" measures against him.
Share
Print
List