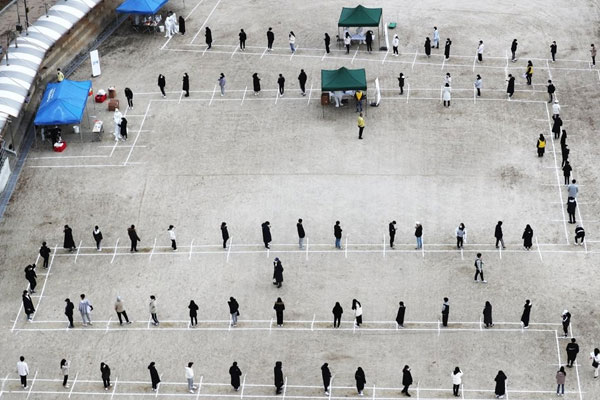 Anchor: South Korea registered more than 500 COVID-19 cases for a third straight day on Friday. The Korea Disease Control and Prevention Agency(KDCA) said Saturday that 504 new infections were detected throughout Friday, raising the accumulated caseload to 33-thousand-375. Amid the third wave of infections, the government is expected to hold a meeting on Sunday to decide whether to further raise the current social distancing level.
Kim Bum-soo has more.

Report: Of the new cases, 486 were locally-transmitted and only 18 were imported from overseas.

The greater Seoul-metro area accounts for 66 percent of all domestic cases, including 176 in the capital city, 122 in Gyeonggi Province and 25 in the western port city of Incheon.

New infections were also reported in most areas throughout the country.

South Korea had managed to keep daily coronavirus infections at around 100 a day until early November. But the daily figure started to soar, surpassing 200 a day in the second week of the month and 300 the following week before going above the 500 threshold from Thursday.

The average daily increase of coronavirus infections transmitted within South Korea stands at 400-point-one for the past week, meeting the government's prerequisite for upgrading its social distancing regulation to Level Two-point-Five.

The Seoul metropolitan area is currently under Level Two while Level One-point-Five is in place for the southwestern Jeolla region and parts of the eastern Gangwon Province.

Health Ministry spokesperson Son Young-rae said the final decision is expected to be made on Sunday after gathering opinions from municipal governments and experts.

The government, however, remains cautious of placing further regulations on businesses already hit hard by the ongoing pandemic.