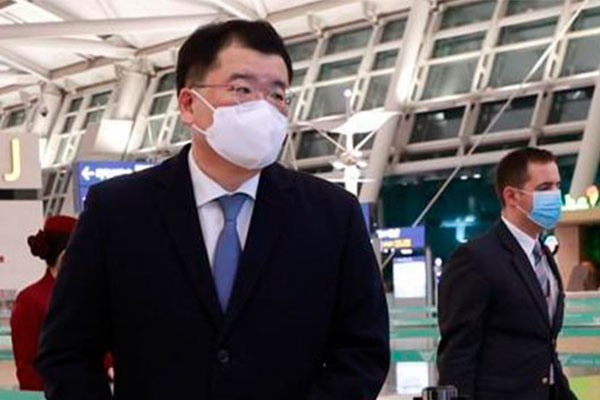 Anchor: A South Korean delegation led by First Vice Foreign Minister Choi Jong-kun, who visited Tehran to win the release of a South Korean-flagged oil tanker and its crew, returned empty-handed. The two countries remain at odds over the vessel's release and withdrawing Iranian funds frozen in South Korean banks due to U.S. sanctions.
Choi You Sun reports.

Choi said he believes that the Iranian government will promptly take steps to release the vessel and its crew, despite falling short of expectations for their release during his visit.

The vice minister said he delivered Seoul's position in a stern manner, while also listening to Tehran's frustrations over its seven billion dollars left frozen in two South Korean banks due to U.S. sanctions.

According to the Iranian government's official website on Thursday, Deputy Justice Minister Mahmoud Hekmatnia told Choi during their meeting that the tanker seizure is a "technical" matter, under the discretion of the country's judiciary.

Tehran did not produce evidence to the claim that the Korean tanker was polluting its waters, despite repeated requests by Seoul.

Hekmatnia, instead, focused on the frozen assets, urging Seoul to remove all obstacles in the promotion of bilateral relations.

Iran's presidential chief of staff Mahmoud Vaezi on Wednesday claimed that Tehran had turned down Seoul's proposal to buy ambulances with the frozen funds and transport them to Iran. He added that the South Korean vice minister had promised to get an exemption from the U.S. on the sanctions.

But the South Korean foreign ministry has denied the claims, saying it was Iran who initially requested the ambulances.

In a similar incident in 2013, Iran had seized an Indian-flagged tanker, citing environmental concerns. Evidence provided by Tehran to back its claims were refuted through satellite imagery. It took 26 days for the vessel to be released.
Choi You Sun, KBS World Radio News.
Share
Print
List