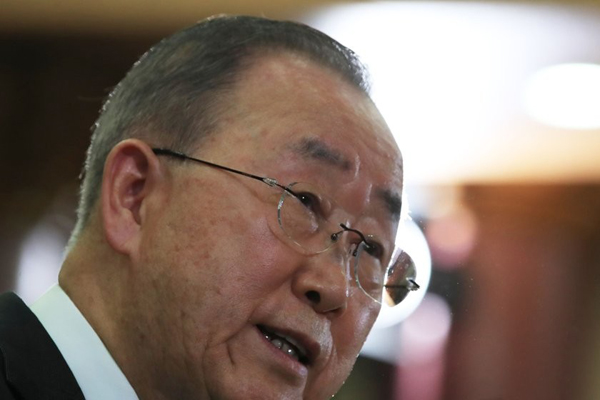 Anchor: Former UN chief Ban Ki-moon joined KBS World Radio on this Friday and urged the international community, especially wealthier countries, not to forget the threats of climate change. He argued that the current COVID-19 pandemic and climate change are two sides of the same coin.
Kim Bum-soo has more.

Report: Former United Nations Secretary-General Ban Ki-moon says pre-existing inequalities around the globe have been significantly aggravated due to the current COVID-19 pandemic.

In an interview with KBS World Radio on Friday, Mr. Ban argued that to resolve the fundamental challenge the world is facing now, the focus should be placed on tackling climate change over the long run.

[Sound bite: Former United Nations Secretary-General Ban Ki-moon]
"In the aftermath of COVID-19, pressing issues like climate change and SDGs are taking a backseat. All available financial resources are injected to resuscitate the economy. However, we should not forget that the twin threats of COVID-19 and climate change are like two sides of the same coin that originated from the same sources. Had we done properly and more sufficiently to combat climate change, we could have reduced the impact of COVID-19. In response to COVID-19, our priority should be building back better and greener."

Earlier in the day Ban and Angelina Jolie, the special envoy for the UN Refugee Agency, joined a forum hosted by Yonsei University and stressed the need for pan-global cooperation in addressing the marginalization of children, women and refugees amid the pandemic.

Ban told KBS World Radio that it's time now for wealthier countries to pursue more than the immediate economic recovery, and prepare for a battle against climate change.

[Sound bite: Former United Nations Secretary-General Ban Ki-moon]
"Even after the pandemic is resolved, I would say there could be aftershocks to follow. We need to be wise in how we use the financial resources we have now. As I said earlier, it is important to focus on building back better and greener. Economic recovery is definitely more than welcome, but it does not mean that we can use up all available resources to this end. The fundamental cause of the challenges we are facing today is climate change. And it requires well-designed climate financing policies as well as resource allocations to combat climate change."

He also urged the South Korean government to contribute more to help the international community resolve challenges it faces.

[Sound bite: Former United Nations Secretary-General Ban Ki-moon]
"[South] Korea is currently the world's tenth-largest economy by nominal GDP and eleventh in terms of per capita income. As a Korean citizen, this is something to be proud of, but as the former Secretary-General of the United Nations, I should challenge that it can and should do more."