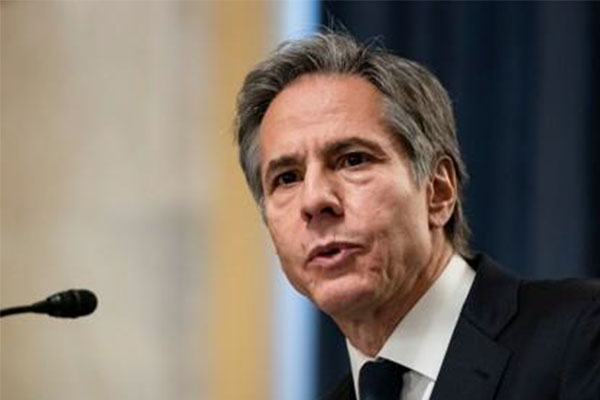 Anchor: Though scant on details, U.S. Secretary of State Antony Blinken once again reiterated the Washington’s commitment to Pyongyang's denuclearization while speaking at a disarmament forum. On the other hand, Blinken provided more information on the Biden administration’s approach to Iran.
Kim Bum-soo has more.

[Sound bite: US Secretary of State Antony Blinken]
"The United States also remains focused on the denuclearization of North Korea and will work closely with allies and partners to address Pyongyang's illicit weapons of mass destruction and ballistic missile programs."

Blinken made the remarks in a video speech sent to the UN-backed Conference on Disarmament on Monday.

During an interview with NBC News earlier this month, the state secretary noted that the U.S. is reviewing its North Korea policy across the board, from sanctions to incentives.

While keeping it vague on the North Korea issue, much of Blinken's speech was focused on how to deal with Iran.

[Sound bite: US Secretary of State Antony Blinken]
"The United States remains committed to ensuring that Iran never acquires a nuclear weapon. Diplomacy is the best path to achieve that goal. President Biden has said if Iran comes back into strict compliance with the JCPOA, the United States is prepared to do the same."

He said Washington is prepared to return to the Iran nuclear deal if Tehran proves its "strict compliance" with the accord.

This came as Tehran appears to be backing away from the deal, which the Biden administration seeks to revive.

The International Atomic Energy Agency said on Sunday that it reached a deal with Tehran to send nuclear inspectors into Iranian facilities for the next three months.