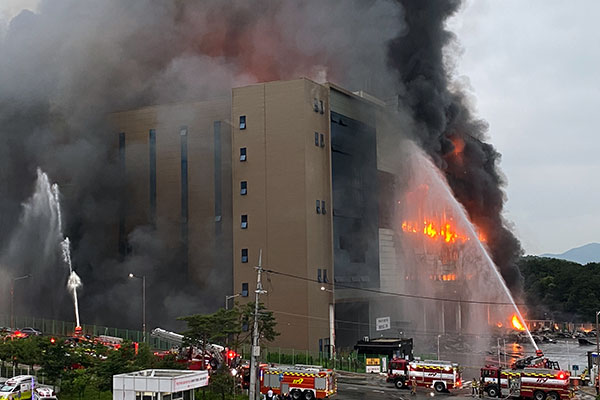 Firefighters are still working to put out a fire on Friday at a Coupang logistics center in Gyeonggi Province, more than a day after the blaze started.

Authorities said the fire broke out at 5:20 a.m. Thursday, possibly due to a spark from a power outlet in a basement of the Deokpyeong Logistics Center in Icheon, south of Seoul.

Fire officials say they expect it will take at least another two days to completely extinguish the flames, as they are currently unable to enter the structure which holds many inflammable products.

The logistics center, which processes general, non-fresh food products, is known to be one of Coupang's largest.

Five firefighters had entered the basement of the building at 11:50 a.m. Thursday to search for survivors after getting the blaze under control. But the flames flared up again, causing them to evacuate, though one - the head of the rescue team in his 50s - did not make it out. All 248 employees working at the time however have been confirmed accounted for.

The rescue effort for the stranded firefighter has remained suspended since Thursday evening as officials say the fire is so strong it makes entry difficult, especially given the presence of combustible objects. They also believe there are risks of a structural collapse and of spreading to nearby warehouses.
Share
Print
List