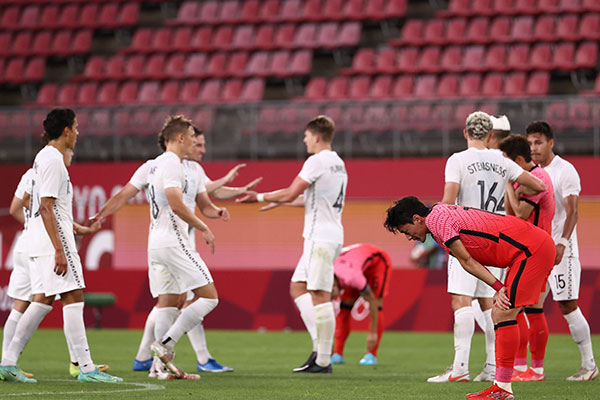 The South Korean men’s Olympic football team lost to New Zealand 1-0 in the Group B opener on Thursday.

During the match at the Ibaraki Kashima Stadium on Thursday, Chris Wood, a striker for English Premier League club Burnley, scored for the Kiwis in the 70th minute, handing South Korea its first loss in their U-23 matchups.

The South Korean men’s Olympic football team had previously emerged victorious in three confrontations against against New Zealand, including a 2-1 win ahead of the 2012 London Olympics.

The loss cast a gloomy shadow over a bid by the Kim Hak-bum squad to clinch a second Olympic medal for the sport after the country won a bronze at the London Games.

Two best teams from each group will advance to the knockout stage with each team playing three matches in the round-robin group stage.

Korea will take on Romania on Sunday and face Honduras on Wednesday next week.

The football match was the first official competition for South Korean athletes in the Tokyo Olympics although the event is set to officially kick off a two-week run on Friday.
Share
Print
List