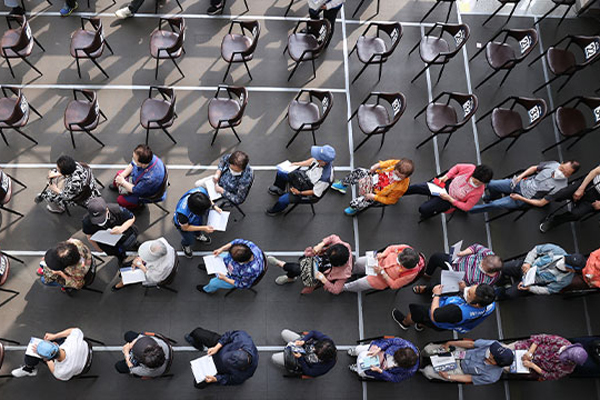 COVID-19 vaccinations for the general public in their 50s will begin on Monday.

According to the vaccination task force on Sunday, those aged 55 to 59 will receive their first shots during a three-week period from Monday. Around three-point-54 million people are eligible and three-point-02 million of them, or 85-point-five percent, have made appointments as of 12 a.m. Saturday.

While those getting vaccinated this week will mainly get the Moderna vaccine, those living in the greater Seoul area will likely receive the Pfizer vaccine as the government seeks to swiftly utilize the Pfizer doses that recently arrived at Incheon International Airport.

They will receive their second shots from August 23 with the interval between the first and second jabs temporarily extended by a week to four weeks for Pfizer and Moderna vaccines.

First-shot inoculations for those aged 50 to 54 will be conducted between August 16 and August 28, while those aged 60 to 74 who cancelled or postponed appointments will be allowed to get vaccinated between Monday and August 14.
Share
Print
List