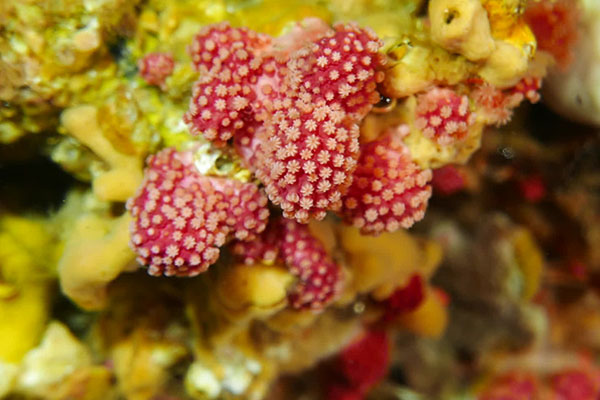 With a continual rise in water temperature in the East Sea, the aquatic ecosystem near Dokdo has seen a significant change.

A KBS team of reporters and camera crews recently explored underwater below the easternmost islets and filmed a field of strawberry coral that grew 15 percent in size compared to five years earlier. Invertebrates familiar to warmer temperatures were observed in the region for the first time.

Various subtropical fish often observed waters off Taiwan and Indonesia were also captured on camera. Damselfish, which used to be a specialty of southern island of Jeju, was also seen thriving in the area, with its number soaring more than ten times over the course of a decade.

Sixty percent of maritime species observed in the area was warm-water fish, marking an increase of 15 percentage points from five years ago.

This came as the water temperature near Dokdo rose by two-point-two degrees Celsius in the past 10 years.

According to the Korea Institute of Oceans Science and Technology, sea water temperature in the East Sea in July posted its highest level in 40 years.
Share
Print
List