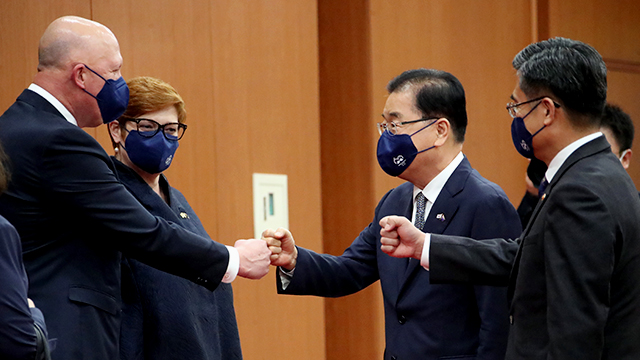 South Korea and Australia have agreed to boost cooperation in cybersecurity, space, defense and the economy for the sake of peace and prosperity in the region.

The ministers stressed that their countries have much to gain through strong cooperation as they share similar values, including democracy.

Chung said communication and cooperation among middle powers have become imperative as uncertainty and instability are rising in international affairs. Payne added that South Korea and Australia share similar views for a safe, open and prosperous Indo-Pacific region.

South Korea and Australia are seeking to upgrade to a comprehensive and strategic partnership to mark their 60th anniversary of diplomatic ties this year.

During Monday’s meetings, the two sides signed a memorandum of understanding for cooperation in cybersecurity and core technologies and also agreed to establish a policy dialogue on space.

The two sides also plan to boost cooperation to respond to climate change and the COVID-19 pandemic.
Share
Print
List