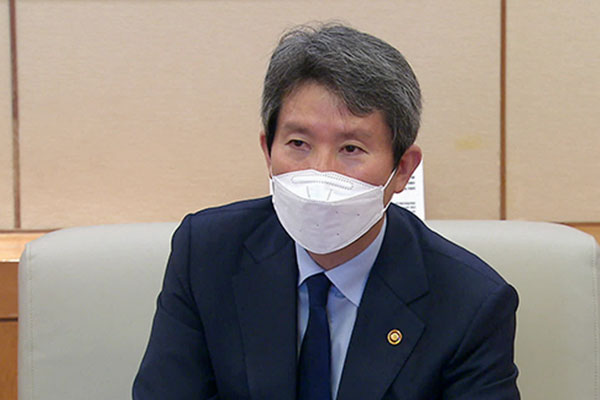 Unification Minister Lee In-young says there is no need to inseparably link the Beijing Winter Olympics and the Korean War-ending declaration.

In a press conference Wednesday, Lee said the push for the declaration was not intended to target the sporting event. Though he hopes for a peaceful Olympics, he doesn't want people to necessarily connect the two issues.

There was speculation that the two Koreas, U.S. and China could use the international venue for discussions on the war-ending declaration but Washington has recently hinted at a possible diplomatic boycott.

Lee's remark appears to correct concerns that the boycott may dampen prospects for the end-of-war declaration.

A senior ministry official later said that related coordination with the U.S. has entered the final stages and that it would be best to sign the declaration before the Olympics.

The minister also urged North Korea to respond to calls for dialogue so that inter-Korean family reunions, either face-to-face or online, could take place in time for the Lunar New Year holiday early next year.
Share
Print
List