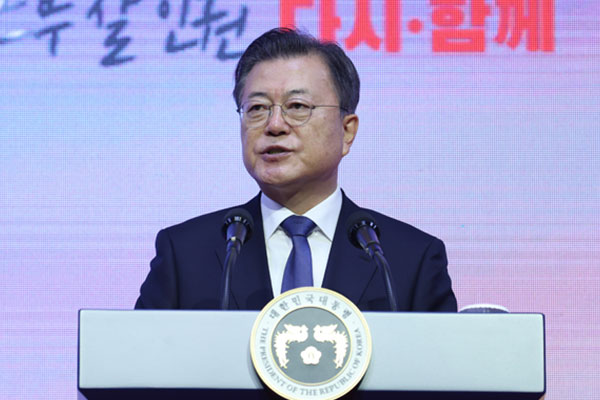 President Moon Jae-in called on collective efforts to create a new human rights standard in keeping with the changing era.

Marking the 20th anniversary of the foundation of the National Human Rights Commission of Korea on Thursday, the president noted the lack of an anti-discrimination law, a challenge for the nation on the road to becoming an advanced nation that ensures fundamental freedom.

Anti-discrimination bills have been submitted to the National Assembly since 2007, but none have passed due to friction among civic groups, lawmakers and religious groups.

Saying that the human rights commission must also play a role in keeping the government in check and demanding necessary measures, Moon pledged that the group’s complete independence would be guaranteed.

The president also urged efforts to tackle newly emerging problems, such as the widening social gap, amid the COVID-19 pandemic and climate crisis.
Share
Print
List