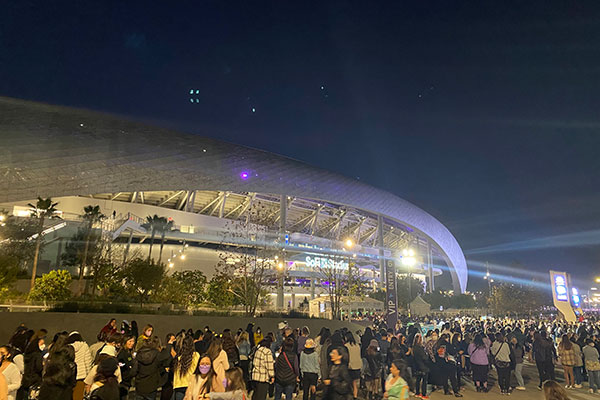 K-pop superband BTS has kicked off its four-part live concert series in Los Angeles to the thrill of some 50-thousand fans who packed SoFi Stadium on Saturday.

“Permission to Dance on Stage” is the band's first in-person concert since a show in Seoul in October 2019, prior to the start of the COVID-19 pandemic.

Fans dubbed the ARMY began to enter the stadium from 5:30 p.m. and sang along to BTS' hits, including "Butter," "Dynamite" and "Permission to Dance,” when music videos were screened on a digital board.

The crowd went wild when the septet took the stage at around 7:50 p.m., some 20 minutes later than scheduled.

BTS' agency Big Hit Music also livestreamed the concert at the nearby YouTube Theater for fans who missed out on tickets to see them perform live.

The band will hold three more concerts at SoFi Stadium through Dec. 2. The final show is set to be livestreamed online.
Share
Print
List