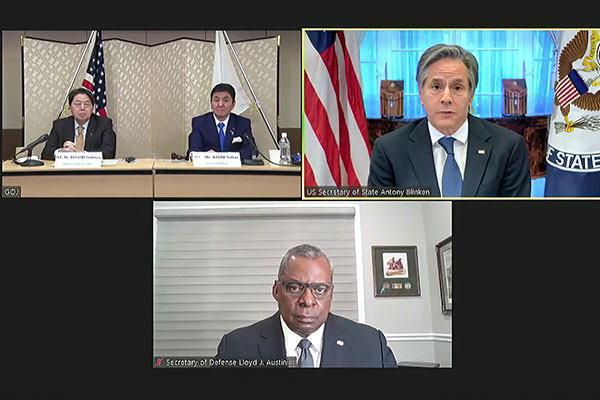 The United States and Japan expressed grave concern over North Korea's nuclear and missile development activities, while reaffirming commitment to the complete denuclearization of the Korean Peninsula.

In a joint statement following an annual security consultative meeting of their top foreign and defense officials on Friday, the two sides urged the North to abide by its obligations under United Nations Security Council resolutions.

The allies also pledged to deepen cooperation among the U.S., Japan, and South Korea, which is critical for shared security, peace and prosperity in the Indo-Pacific region and beyond.

They also confirmed the need for an immediate resolution of issues regarding the abduction of Japanese nationals.

The latest "two-plus-two" meeting, held virtually this year, is the first to be held under Japan's Fumio Kishida government and comes around ten months after previous face-to-face talks in Tokyo.

Earlier this week, North Korea fired a projectile towards the East Sea, later claiming it was a hypersonic missile.
Share
Print
List