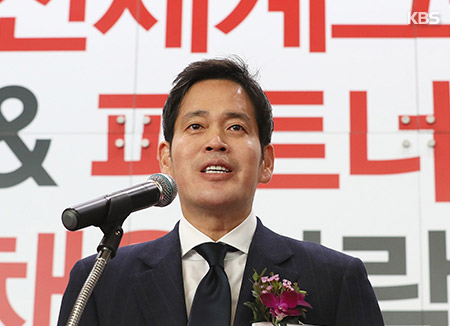 An heir to retail giant Shinsegye Group said he will no longer upload anti-communist social media posts, after sparking political controversy and leading some to declare a boycott of Shinsegye products.

Shinsegae Group Vice Chairman Chung Yong-jin reportedly spoke about his decision on Monday, according to a senior representative at the retail giant.

It all began last week when Instagram deleted one of Chung's posts captioned with the hashtag "myeolgong," meaning eradicating communism, in violation of its policy on violence and instigation.

The following day, Chung posted a news article featuring a photo of Chinese President Xi Jinping, then later a photo of North Korean leader Kim Jong-un, with the same hashtag.

Amid controversy, main opposition People Power Party(PPP) presidential candidate Yoon Suk Yeol posted a photo of himself purchasing "myeolchi," or anchovies in Korean, and "kong," which are beans, at an Emart operated by Shinsegye Group.

Many believed that Yoon was making an implicit reference to "myeolgong.”

Following similar posts by opposition figures, which were then slammed by ruling party politicians, some have called to boycott Shinsegye and its affiliates, including Starbucks Coffee Korea. Shinsegye shares also fell six-point-eight percent on Monday.
Share
Print
List