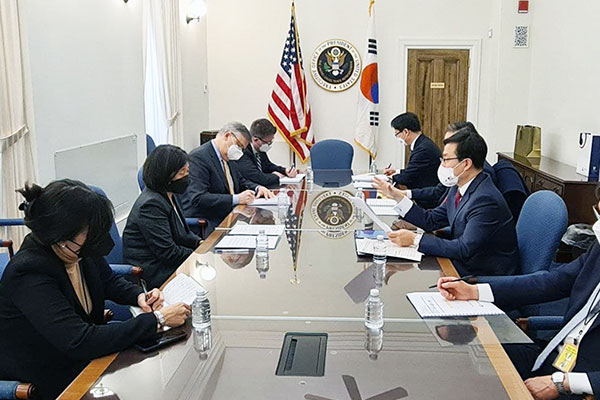 According to the trade ministry on Friday, Minister for Trade Yeo Han-koo who is currently visiting Washington, met with U.S. Trade Representative(USTR) Katherine Tai on Thursday.

In 2018, the U.S. enforced import tariffs of 25 percent on European steel products, while waiving them for South Korean products. However, it was done in exchange for an annual import quota of two-point-63 million tons, or 70 percent of Seoul's average export volume.

Seoul has pushed for the two sides to revise the terms after Washington lifted the tariffs on European steel and aluminum, effective January 1.

Tai, meanwhile, emphasized the challenges of global overcapacity driven by non-market practices and ongoing strong concerns of U.S. stakeholders. She added that the U.S. is focused on talks to develop a global arrangement for carbon intensity of the steel and aluminum trade.

Speaking to local media outlets in Washington, Yeo said steel is a politically sensitive issue in the U.S. and the American steel industry cites excessive global supply as the root of all problems.

The minister said Seoul will continue to seek renegotiation of the quota through various channels.
Share
Print
List