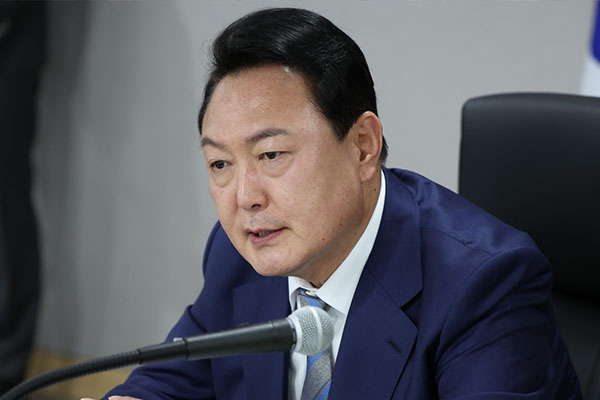 President-elect Yoon Suk Yeol said the issue of transferring wartime operational control from the U.S is not a matter of ideology or any other pretext but should be determined by what is the most effective way to win a war.

In an interview with Voice of America published Saturday, Yoon was asked about whether the command transfer should be progressing more quickly.

He said South Korea should secure and be able to operate a certain scope of reconnaissance assets but he believes preparations are not yet sufficient.

On whether he is willing to meet with North Korean leader Kim Jong-un to resume dialogue, Yoon said there's no reason to avoid a meeting. But he added that talks only for show that don't produce tangible results are not helpful with denuclearization or inter-Korean relations.

Yoon said it's important to send consistent signals and messages to the North when it comes to the nuclear issue and that programs to support its economy will be prepared if the regime implements measures of irreversible denuclearization or accepts nuclear inspections.

Yoon also expressed hope to expand Korea's participation in working groups of the Quad security alliance that concern not only vaccines but also climate change and technology. On the South Korea-U.S. alliance, he stressed that it should be expanded and elevated to a comprehensive partnership in all areas beyond security to include economy, technology, supply chain, climate and health.
Share
Print
List