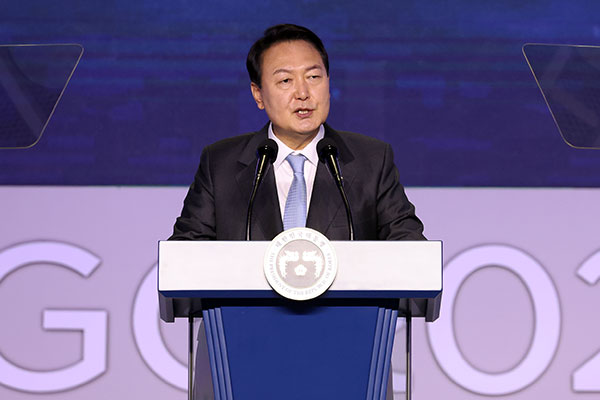 President Yoon Suk Yeol has pledged South Korea will fulfill its responsibility and role as a leader in the global effort to achieve carbon neutrality.

At the opening of the 28th World Gas Conference in Daegu on Tuesday, Yoon called for a reasonable mix of energy sources, including natural gas, nuclear and renewables as the country forges forward toward carbon neutrality.

Stating that a stable energy supply was a major driving force behind South Korea's unprecedented rapid expansion, the president said sustainable growth and the future as a whole may well depend on energy policy.

He called for a groundbreaking reduction in carbon generation in the long term while looking to transition into the hydrogen industry, pledging to expand state investment in technological development and secure hydrogen production both at home and abroad to ensure a stable supply.

In the wake of growing uncertainty over energy and raw material supplies, Yoon emphasized the importance of energy security, the need to diversify import channels and to increase the overseas development of natural resources.
Share
Print
List