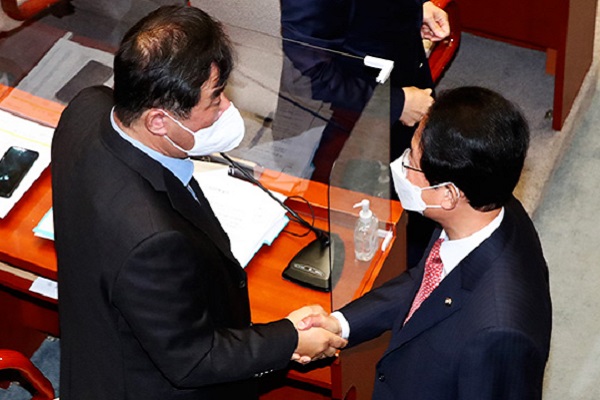 Rival parties have failed to narrow differences in negotiations on this year's  second extra budget bill aimed at supporting small merchants hit by the COVID-19 pandemic.

Floor Leader Kweon Seong-dong of the ruling People Power Party(PPP) told reporters on Friday that the two factions will not hold a parliamentary plenary session Friday as the main opposition Democratic Party did not accept the PPP's proposal.

Kweon said the rival parties tentatively agreed to convene a plenary session at 8 p.m. on Saturday.

DP Floor Leader Park Hong-keun said the two sides will continue to try and narrow differences on the budget.

The floor leadership of the rival parties held negotiations but failed to reach agreement on key issues including a retroactive coverage of losses of small merchants hit by the COVID-19 pandemic.

Later the floor leaders were joined by Finance Minister Choo Kyung and continued negotiations, but still failed to make progress.

The rival parties are struggling to reconcile their differences on the budget bill as the DP reportedly proposed spending in excess of 50 trillion won while the PPP persisted its initial plan of 36-point-four trillion won.
Share
Print
List