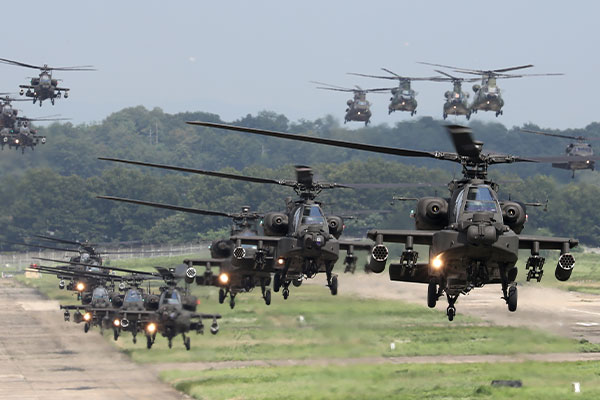 The South Korean Army flexed its combat power during a large-scale air drill held at two Army facilities in Icheon and Yangpyeong in Gyeonggi Province on Monday.

A total of 34 helicopters, including 16 Apache Guardians, 13 Black Hawks and five Chinooks were mobilized for the largest-ever exercise of its kind conducted by the Army, simulating a scenario in which troops are required to infiltrate enemy territory by air and secure a target.

In the training, the Army's key asset, the Apache attack helicopters, executed sharp descents after soaring vertically, a maneuver intended to minimize exposure to hostile fire.

The choppers also fired some 150 2-point-75 inch rockets and 450 rounds from a 30-millimeter machine gun in a display of firepower.

The Army noted there were many restrictions on such drills over the past two years due to the pandemic.

Col. Choi Jae-hyuk of the Army's First Aviation Brigade said the air assets are key to ensuring victory in ground warfare based on swift mobility and massive firepower.

He vowed to focus on continual training in order to maintain a readiness posture capable of completely overwhelming enemy forces whenever called upon.
Share
Print
List