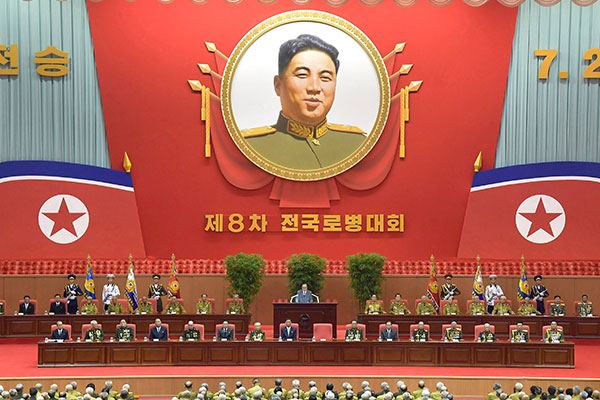 North Korean leader Kim Jong-un was absent from a nationwide event for Korean War veterans on Tuesday, ahead of the 69th anniversary of the signing of the armistice agreement.

According to the state-run Korean Central News Agency(KCNA) on Wednesday, the event was held in Pyongyang amid a celebratory fervor as the North Korean people showed their respect.

The Central Committee of the Workers' Party of Korea reportedly congratulated the veterans and said the revolutionary path connecting generations clashes with imperialism, stressing the importance of upholding the spirit of the war-winning generation.

While Kim did not attend, senior ruling party and military officials were present, including politburo standing committee member Choe Ryong-hae and Jong Kyong-thaek, the director of the General Political Bureau of the Korean People's Army.

Leading up to the event, there had been speculation that Kim might appear to deliver a message about the regime's nuclear intent, as it is believed to have completed preparations for a seventh nuclear test.

The North, which claims to have defeated the U.S. during the three-year conflict, declared the July 27 Armistice signing "the Day of Victory in the Great Fatherland Liberation War" in 1973, later promoting it to a national holiday in 1996.
Share
Print
List