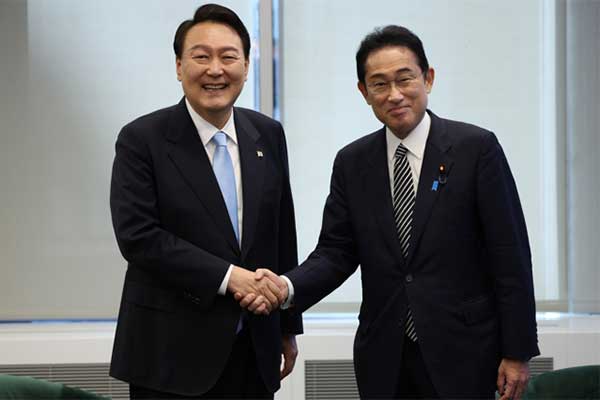 The ruling and opposition camps had sharply contrasting reactions to President Yoon Suk Yeol's meeting with Japanese Prime Minister Fumio Kishida on Wednesday on the sidelines of the UN General Assembly in New York.

The ruling People Power Party(PPP) proclaimed that the meeting provided a breakthrough for the normalization of Seoul-Tokyo relations, which the party said had been destroyed by the previous Moon Jae-in government.

The PPP said bilateral ties have begun to thaw with a "warm breeze" after suffering years of strain, citing the recent resumption of flights between Seoul's Gimpo and Tokyo's Haneda airports as an example of improvement.

The main opposition Democratic Party(DP), meanwhile, called the pursuit of the meeting and the outcome "humiliating," noting that there was no specific agenda or practical progress made on dividing issues such as Japan's wartime forced labor.

Meanwhile, while Seoul referred to the Wednesday event as an "informal meeting," Tokyo classified it as "informal talks," a move some analysts say is intended to convey Japan's perception that the discussion was not held in an official capacity.
Share
Print
List