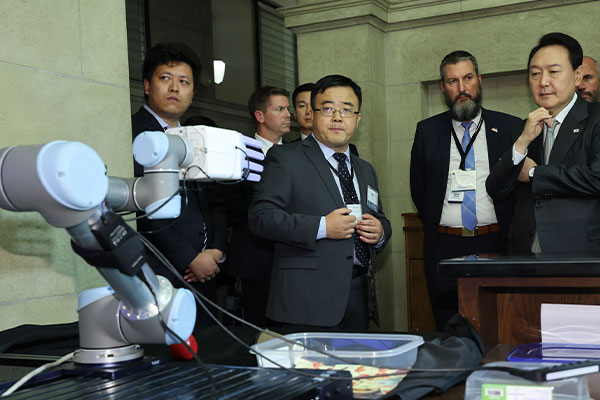 President Yoon Suk Yeol pledged to actively support cooperation between South Korea and Canada in artificial intelligence(AI), saying AI technology is at the core of his administration's pursuit of a “digital platform government.”

Meeting with scholars of the field during a visit to the University of Toronto on Thursday, Yoon expressed hope that the two sides would make innovative progress through cooperation.

The president described his envisioned “digital platform government” as a means of improving public services and welfare programs for the socially vulnerable by connecting data across the public and private sectors.

Yoon's pledge to support bilateral cooperation comes a day after speaking about using digital technology to realize universal values of freedom and human rights and to create a new order for peace and prosperity in a speech in New York.

Following the president's remarks in Toronto, his senior secretary for economic affairs Choi Sang-mok said South Korea, which currently ranks sixth in terms of AI competitiveness, will invest in the field to rise to the world's top three.
Share
Print
List