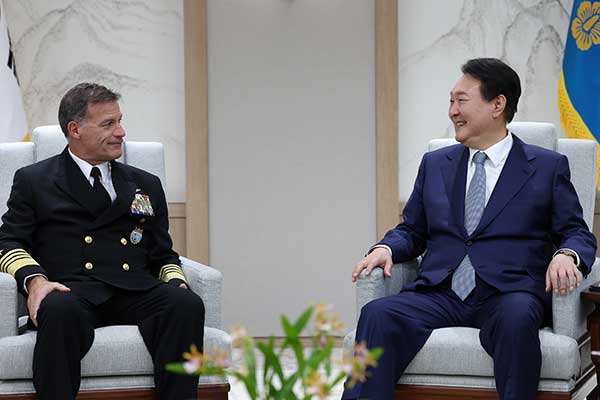 President Yoon Suk Yeol met with the commander of the U.S. Indo-Pacific Command on Thursday and stressed the importance of the allies' combined military exercises.

Presidential spokesperson Lee Jae-myoung said in a written briefing that President Yoon met Admiral John Aquilino at the presidential office in Seoul on Thursday afternoon and hailed the South Korea-U.S. alliance as the key to maintaining peace and stability on the Korean Peninsula.

The president continued to say that restoring the combined exercises will increase deterrence against North Korea and contribute to further peace on the peninsula and in Northeast Asia.

He added that the visit of the USS Ronald Reagan aircraft carrier strike group and the successful naval exercise between South Korea and the United States proves the U.S.' strong extended deterrence.

In response, the commander agreed that the return of the Ronald Reagan to the combined exercises demonstrated the firm U.S. commitment to the defense of South Korea.

The USS Ronald Reagan participated in Seoul and Washington's joint naval drills late last month before departing from the region, but returned this week for a joint drill with South Korea and Japan after North Korea fired an intermediate-range ballistic missile over Japan on Tuesday.
Share
Print
List